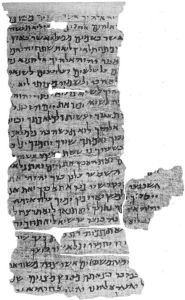 Several years ago I heard about a most remarkable document. This ancient document, known as the Nash Papyrus has survived as an ancient witness to some of Israel’s most important words relating to religious life and conduct for humanity. The document is a single page consisting of four precious fragments of text written in Hebrew Script. It was acquired in Egypt in 1898 by W.L. Nash, the Secretary of the Society of Biblical Archaeology, who presented them to Cambridge University Library. The dating of the papyrus was originally dated to the second century of the Common Era, but subsequent reappraisals have estimated a date range from 150 to 100 years before the Common Era.

There are a total of 24 lines of text and perhaps traces of a 25th line. The edges have been worn away over time taking with them portions of the author’s original work. The missing words and letters however can be and have been rather confidently restored by a careful comparison of other texts by scholars who have studied the papyrus fragments.

The document contains a version of the Decalogue and the Shema, though both diverge from the Massoretic text containing many variants. The Decalogue in the Nash Papyrus more closely follows the version in Exodus 20, but at times employs language particular to the version contained in Deuteronomy 5.

The order of the commandments as listed in the Nash Papyrus is different than the “authorized” version passed along by the scribes, but matches the order apparently known to the writers of the Christian Scriptures (Romans 13:9, James 2:11, Mark 10:19, Luke 18:20), Philo, Tertullian, Clement of Alexandria, Hippolytus of Portus and Ambrosiaster. The order that has been preserved in the Massoretic text became fixed at an early date, being attested to by Josephus, and in Christian sources such as Matthew 19:18 and the Didache.

It has been proposed that the document is likely an ancient witness to an early form of liturgy for synagogue service. It is interesting that it contains the Decalogue since we know that it’s reading was removed from the liturgy on account of the minim at an early date, towards the end of the Second Temple period. The supposed purpose of the removal from the service was to counter the claim by the “minim” that the Decalogue held special import among the numerous commands of the Torah.

Despite the differences between the “authorized version” and the Nash Papyrus, I still love this ancient witness. It presents a version of the Decalogue along with Israel’s greatest declaration of the Oneness of God.

Here is my translation of the words of the papyrus fragments. I have been somewhat literal in my translation but have left some of the language in the form that is most familiar to English readers. Where the text had to be supplied, I have made every attempt to enclose the translation of supplied words in [brackets]. Where the commandment does not read precisely as the standard versions, the divergence is more than likely my translation rather than a variation in the text.

I continue to study and meditate on the meaning of these remarkable words called the Testimony of God and will for as long as I live, seek to do so in accordance with their meaning.

Line 1 – [I am Y]HVH your God who brought you out from the land of [Egypt, from a house of servants.]

Line 4 – [which is in w]aters [below] the earth. You shall not bow down to them and you shall not serve them]

Line 5 – [Because] I YHVH your God am a jealous God, v[isiting the iniquity of fathers]

Line 7 – [to thousands] to those who love me, to those who guard my commands. No you [shall lift the name of]

Line 9 – [lifts his nam]e for falsehood. Remember the Sabbath Day to [sanctify it]

Line 12 – [and your daughter, and] your servant and your handmaid, your ox and your donkey and all your a[nimals]

Line 13 – [and a stranger which is] in your gates, because six days Y[HVH] made

Line 15 – and he rested [on the] seventh [day], therefore YHVH blessed [the day]

Line 16 – the seventh and sanctified it. Honor your father and [your] mother [in order that]

Line 19 – [st]eal. [You shall] not [ans]wer with your neighbor a false testimony. You shall not desire

Line 21 – [or his servant, or his handmaid or] his [o]x or his donkey or all which is for your neighbor

Line 23 – [of Israel] in the wilderness, in their going forth from the land of Egypt. Hea[r]

This remarkable document combines the Decalogue with a declaration of the oneness of God, providing us with an ancient witness to the more weightier matters of a true biblical faith.