Reading Genesis From the Heavens 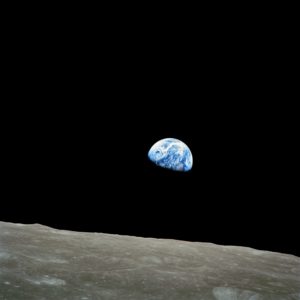 On Christmas Eve, in what was the most watched television broadcast of the time, the three-man crew of Apollo 8 took turns reading from the Book of Genesis as they orbited the moon.

Here is the transcript of that broadcast.

Bill Anders
We are now approaching lunar sunrise and, for all the people back on Earth, the crew of Apollo 8 has a message that we would like to send to you.

Frank Borman
And God said, Let the waters under the heavens be gathered together unto one place, and let the dry land appear: and it was so.
And God called the dry land earth; and the gathering together of the waters He called seas: and God saw that it was good.

And from the crew of Apollo 8, we close with good night, good luck, a Merry Christmas – and God bless all of you, all of you on the good Earth.

For the transcript, see the article published on Nasa’s site.