Swearing by the Name of YHVH 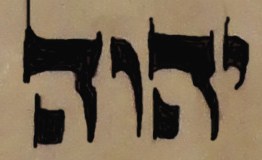 This paper is a preliminary study of an ancient and long forgotten practice – swearing by the name of YHVH. According to the Hebrew Bible, swearing by the name of YHVH was a common practice in antiquity. Men and women, prophets and kings, swore in the name of Israel’s God as commanded in the Torah of Moses (Deuteronomy 6:13, 10:20). After the close of the biblical period, the practice fell into disuse, but Israel’s prophets, claiming authority from God Himself, intimate that the practice will be restored leading to the redemption of Israel and bringing blessings to all the families of the earth.

Two texts from the Torah’s final book declare that swearing in the name of YHVH is a commandment.

“It is the LORD your God you shall fear. Him you shall serve and by his name you shall swear.” (Deuteronomy 6:13 ESV)

“You shall fear the LORD your God. You shall serve him and hold fast to him, and by his name you shall swear.” (Deuteronomy 10:20 ESV)

In these texts we see that swearing by the name is commanded, but the text is less clear as to how one would do it. The Hebrew Bible does provide us with examples of the ancient practice however, and these are instructive for the present study.

“And Saul listened to the voice of Jonathan. Saul swore, “As the LORD lives, he shall not be put to death.” (1 Samuel 19:6 ESV)

“But David vowed again, saying, “Your father knows well that I have found favor in your eyes, and he thinks, ‘Do not let Jonathan know this, lest he be grieved.’ But truly, as the LORD lives and as your soul lives, there is but a step between me and death.” (1 Samuel 20:3 ESV)

“But Saul swore to her by the LORD, “As the LORD lives, no punishment shall come upon you for this thing.” (1 Samuel 28:10 ESV)

“Then King Zedekiah swore secretly to Jeremiah, “As the LORD lives, who made our souls, I will not put you to death or deliver you into the hand of these men who seek your life.” (Jeremiah 38:16 ESV)

In each of these examples we read that a biblical personality swore, and in the example from First Samuel 28:10 we see that the oath is “by the LORD.” The oath itself is confirmed by the phrase translated into English – “as the LORD lives.” The Hebrew phrase behind this translation is חי יהוה. The meaning in its basic form affirms that the words of the oath are as sure as the fact of existence of Israel’s God – YHVH lives!

The Oath of Kings, Prophets and Commoners

After the close of the biblical period, perhaps due to various exiles of the people of Israel, the practice fell into disuse. The phrase found so frequently in the Hebrew Bible disappeared from the lips of the people of Israel. According to the “Jewish Encyclopedia,” Philo, the Hellenistic Jewish philosopher (25 B.C.E. – 50 C.E.) is quoted as saying, “The bare word of a virtuous man should be like an oath, steadfast, inviolable, and true. Should necessity absolutely require an oath let a man swear by his father and mother instead of by the name of the highest and first Essence.” Jesus and his brother James seemingly discouraged the taking of oaths as a general rule, preferring a simple yes or no (Matthew 5:37; James 5:12). Were it not for a word from Israel’s ancient prophets, one might relegate the swearing by the name of Israel’s God to the biblical period as a matter of antiquated religion.

Learning and Teaching Others to Swear by the Name

In a passage that describes a future restoration of Israel, the prophet Jeremiah gives a prophecy that indicates a resurgence of the practice of swearing by the name of YHVH.

Here, the oath is mentioned twice: the first time referring to the oath as it was known among the ancients, and once as it will be declared among the latter day children of Israel. In yet another prophetic passage, Jeremiah warns Israel’s neighbors, who in past times taught Israel to swear by their gods to “learn the ways of my people, to swear by my name – as YHVH lives,” or they will be destroyed (Jeremiah 12:14-17)! It is also Jeremiah who gives perhaps the most significant prophecy concerning the restoration of the ancient practice of swearing by the name YHVH.

“If you return, O Israel, declares the LORD, to me you should return. If you remove your detestable things from my presence, and do not waver, and if you swear, ‘As the LORD lives,’ in truth, in justice, and in righteousness, then nations shall bless themselves in him, and in him shall they glory.” (Jeremiah 4:1–2 ESV)

This remarkable word from the prophet Jeremiah ties the reinstatement of the ancient practice of swearing by the name YHVH to the return of latter day Israel and promises that if the practice is done in truth, justice and righteousness, that the nations of the world will bless themselves in him, an obvious allusion to the promises of the Abrahamic plan (Genesis 12:3, 18:18, 26:4, 28:14).