I Have A Dream – The Anniversary 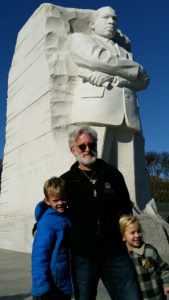 With grandsons Asher and Ezekiel King in Washington D.C.

Fifty-seven years ago, on August 28, 1963, an estimated 200,000+ people marched on Washington, D.C. in what was called the march on Washington for jobs and freedom. It was during this march that the late Dr. Martin Luther King, Jr. delivered his now famous I Have a Dream speech from the steps of the Lincoln Memorial. The speech is arguably one of the greatest speeches of the twentieth century and is a hallmark of the Civil Rights Movement in America. In the speech, Dr. King referred to some of America’s founding documents as justification for freedom for ALL. It was an appeal to all who heard his words, to live true to the words of our cherished beliefs that declared liberty and freedom to all of the citizens of America. It was an open challenge for America to live up to its creed, or as Dr. King put it,

“I still have a dream, a dream deeply rooted in the American dream – one day this nation will rise up and live up to its creed, ‘We hold these truths to be self evident: that all men are created equal.’ I have a dream . . .”

Following the speech, Dr. King was recognized as TIME Magazine’s Man of the Year in 1963, and in 1964, he became the youngest person to be awarded the Nobel Peace Prize. Here is that speech.

Martin Luther King Jr. was born on January 15, 1929. While I claim to be no authority on the man, I have always been inspired by his speeches and have great admiration for his work – namely in his efforts to achieve social justice and equality on behalf of his people.

I am a student of Scripture and so from this perspective, I wanted to share something relevant in regards to the man and his work that I discovered several years ago. As a student of the Torah, I follow the weekly portions of the Law of Moses and in my classes I tend to look for ways to connect our present world with the ancient through these readings which have been in place in Judaism for nearly 2,000 years as far as we can determine. Time and again I have discovered interesting points – where current events seem to coincide with something found within the Torah reading. Several years ago as I prepared my class on the portion of Scripture that deals with the Exodus from Egypt, I immediately thought of Martin Luther King, Jr. who found much similarity between the struggles of his own people and the ancient children of Israel. As it turns out, the regular Torah reading for the week that Martin Luther King was born was the Hebrew Torah Reading that contains the story of the departure of the Children of Israel from the oppressive Egyptians! The texts contained in this reading are Exodus 10:1 – 13:16. Like a modern-day Moses, Martin Luther King Jr. would devote his adult life to a struggle for freedom for his people.

I find it worth mentioning that the week he was born, all over the world Jewish people were reading Moses’ words to Pharaoh – “Let my people go!” Did these words carry in the wind into the ears of a small baby who would grow up to speak them again to the oppressors of his own generation? One can only wonder if somehow, these Torah portions contain a glimpse of what our own purposes are to be. At least in the case of Martin Luther King Jr., it would seem to be the case.

In light of the interesting connection between the Hebrew Moses and Dr. Martin Luther King, Jr, watch this video of his final speech. He would be killed the very next day.

On the anniversary of the March on Washington and the, I Have a Dream speech, I have to wonder. For what cause would our generation assemble peacefully in such vast numbers. Would we travel great distances at great costs and come together in harmony for any cause? Who is the moral leader of our generation? Who is the voice that could convey a message that has the power to peacefully inspire change? May we all be inspired to seek out injustice in our own world. For as Dr. King once said, “Injustice anywhere is a threat to justice everywhere.”