The Seat of Moses – 21 Years Since the Discovery 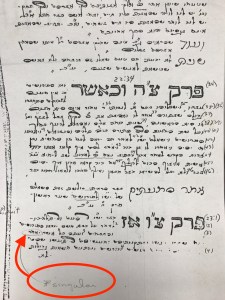 In 1995 I was given a copy of an interesting article written by Mark Allan Powell of Trinity Lutheran Seminary, Columbus Ohio. This article, (Do and Keep What Moses Says) was published in the prestigious Journal of Biblical Literature [JBL 114/3 (1995) 419-435]. It proposed an alternate interpretation of Matthew 23:2-3.

By the fall of 1996, I had almost forgotten about Mark Powell’s article, and perhaps would have never looked at it again if I had not studied the Hebrew Matthew contained in the polemical treatise of a Spanish Jew named Shem Tob ben Isaac ben Shaprut. This treatise was composed in 1380 and had become the latest work of New Testament scholar George Howard of the University of Georgia. In 1987, Dr. Howard had published this Hebrew Matthew text in “The Gospel of Matthew According to a Primitive Hebrew Text, Mercer University Press“. Eight years later, Dr. Howard revised and re-published this text under the title, Hebrew Gospel of Matthew, Mercer University Press. This later edition is the one that I had obtained, and the one that led me to discover a variant text that could shed some light on the subject at hand.

I wrote an article on this particular reading and submitted it to the then presiding editor over the Journal of Biblical Literature. At the time I was told that the article was “not really suitable for publication in JBL.” The editor wished me well and said that she hoped that my rejection did not diminish my interest in the Journal of Biblical Literature. It certainly did not. This journal is a very fine publication, and frankly my article was not as “academic” as the term is strictly defined. I posted the article on the web and it was discovered by Nehemia Gordon, who was doing research on this subject for a book that he was writing. The article was referenced in a couple of footnotes in his work – The Hebrew Yeshua Vs the Greek Jesus, Hilkiah Press 2005 (see pp. 49 and 53). Nehemia gave me credit as being the first to notice the variant reading discussed in this article, which I have revised and posted below 20 years after it was originally written. It is my belief that the subject has become more relevant today since an ever increasing number of Christians are being “drawn” to the Jewish/Hebraic roots of their Faith.

The Seat of Moses

Perhaps no other passage in Matthew’s Gospel stands more at variance with the book’s overall theology than Matthew 23:2-3. [i]  The difficulty which these words have presented to scholars was described by Jack Dean Kingsbury when he said, “To date, no scholarly proposal for resolving these apparent contradictions has proved entirely satisfactory.” [ii]

In 1995, while engaged in a study of Shem Tob’s [iii] Hebrew Matthew, I discovered a variant reading which deserves a place in this discussion. Although Shem Tob’s Matthew text was preserved within a Jewish Polemic treatise dating only to the Middle Ages, Professor George Howard has effectively argued that, “the evidence suggests that the Matthew text predates the fourteenth century.” [iv] Shem Tob’s Matthew is the earliest known complete copy of the Gospel in the Hebrew language. It is replete with puns, alliterations, and word connections which far exceed what is found in the Greek texts. [v]

The lack of a definitive solution to the interpretation of Matthew 23:2-3 based upon Greek sources suggests that we consider other sources for a possible explanation. I propose that the variant reading found within Shem Tob’s text provides the solution to these apparent contradictions.

Whether taken literally or metaphorically, the “seat of Moses” is generally understood to represent authority to teach Moses. [vi] In Greek Matthew, the Pharisees and Scribes sit upon the seat of Moses, and so most interpretations assume that “they” are the inheritors of this authority – a fact which even Jesus apparently admits. The Jesus of Greek Matthew follows his own apparent admission of the authority of these leaders with a charge for his disciples to follow the teachings of these Jewish leaders.

Mat. 23:3a (RSV)[so practice and observe whatever they tell you;]

Based upon the above reading, Jesus demands adherence to the teachings of the religious leaders; this is a most puzzling command when Matthew is viewed as a whole. Here it would seem that the real error of these leaders is hypocrisy (Mt 23:3b ff). Matthew, however, clearly points out that these leaders are not hypocrites in the sense that the word is often understood as saying one thing while doing something else. Matthew’s Jesus finds fault with the teachings AND actions of these leaders. Matthew’s Jesus assigns the following words of Isaiah to the religious leaders of his day:

“And the Lord said, ‘Because this people draw near with their mouth and honor me with their lips, while their hearts are far from me, and their fear of me is a commandment of men learned by rote; therefore, behold, I will again do marvelous things with this people, wonderful and marvelous; and the wisdom of their wise men shall perish, and the discernment of their discerning men shall be hid.’” (RSV) (Isaiah 29:13-14; cf Matthew 15:8)

According to Matthew’s Jesus, the religious leaders teach commandments of men which make void the commandments of God (15:6). Their teachings are plants which will be uprooted (15:13) since they were not planted by God, but by an enemy (13:37-39). Their teachings placed emphasis on human ordinances which affected the outer man while leaving the inner man untouched (23:25-28). Their teachings miss the deeper spiritual truth which Moses intended; they “strain at a gnat, and swallow a camel” (23:24). Jesus considered the teachings of these leaders to be leaven, which left unchallenged, would leaven the whole (16:11-12). The leaders erred because they “knew not the Scriptures” (22:29). Their traditions had led them away from true loyalty, truth, and faithfulness – the weightier matters of the Torah (23:23). Indeed, the Pharisees and Scribes practiced what they preached. The problem, according to Matthew’s Jesus, was that they preached the wrong things. Hypocrisy then, as Powell notes, is a conflict between the “inward nature observed by God and the outward appearance observed by others” (Powell, p. 423).

“Upon the seat of Moses the Pharisees and Sages sit, and now, all which HE (Moses) will say [vii]  unto you-keep and do; but THEIR ordinances and deeds do not do, because THEY say and do not.”

The Hebrew of Shem Tob’s Matthew allows for a clear distinction to be made between what HE (Moses) says and what THEY (the religious leaders) say. While admitting that the Pharisees and Sages “sit upon Moses’ seat,” the Hebrew of Shem Tob’s Matthew does not demand that the people and his disciples do and keep what THEY say. Rather by using the singular – “He will say,” his hearers are directed to keep and do whatever Moses says unto them, but NOT to do according to the ordinances and deeds of the religious leaders. This proposed solution, based upon a variant reading found within Shem Tob’s Hebrew Matthew text fits within the interpretive framework of Matthew and it provides a sensible solution to the apparent contradictions which the Greek texts present to scholars. [viii]

A version of this article was accepted and published in 2010 on the website, The Bible & Interpretation. Check it out by clicking here.

[iii] By Shem Tob, I refer to the Hebrew Manuscript of Matthew which was found preserved in the Jewish polemical treatise titled Even Bohan. This treatise was the work of one Shem Tob ben Isaac ben Shaprut, a Spanish writer who composed his work in 1380. The work was first published by George Howard of the University of Georgia in 1987 under the title, The Gospel of Matthew according to a Primitive Hebrew Text, Mercer University Press. Eight years later a second and fully revised edition was published and re-titled, Hebrew Gospel of Matthew, Mercer University Press, 1995. Both editions contain the Hebrew text and a detailed analysis.

[iv] In both editions of George Howard’s work, he argues that the text predates the fourteenth century and that Shem Tob received his text from earlier Jewish scribes, but beyond this, he does not attempt to date the text.

[v] For a detailed study of the puns, alliterations, and word connections, see Howard; Hebrew Gospel of Matthew, (pp 184-190)

[vi] The phrase “seat of Moses” has been the subject of much discussion. The idea that this phrase denotes ruling authority may find support within the Torah itself. See Exodus 18:13.

[vii] Two of the nine manuscripts of Shem Tob’s text preserve the reading יאמר (he will say). Howard employs both of the texts which read the singular in his book; Hebrew Gospel of Matthew, (p.112 Hebrew text). One is catalogued Ms.Add. no. 26964. British Library, London. The other text which reads, “he will say” is Ms. Opp. Add. 4· 72. Bodleian Library, Oxford. All other manuscripts read יאמרו. For a list of all manuscripts, see Howard, Hebrew Gospel of Matthew, (p. xii). The Old Latin Manuscript ff2 also reads the singular at this point [dixerit].

[viii] Professors George Howard and James D. Tabor have been instrumental in my studies of the Hebrew language and the Hebraic Matthean tradition. Their research related to the field of Christian origins was the catalyst of the present study.